Ariana and Brielle Biermann Pitching Reality Series: We Wanna Be Back on TV! 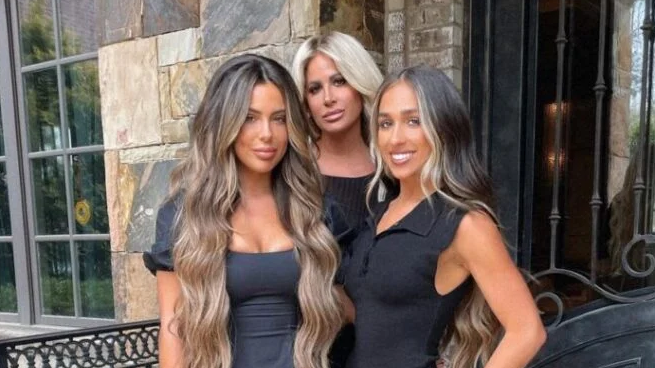 But while many have discussed the idea of Kim staging a Real Housewives comeback, other eyes are on her eldest daughters.

Brielle and Ariana Biermann are hot young women with followings of their own.

And the two are pitching a thought-provoking reality TV idea.

Though many viewers watched Kim and Kroy’s entire brood grow up, Brielle and Ariana are not little kids anymore.

And the two hope that their journey as young adults will be captivating enough to attract a sizable audience of viewers.

The proposed reality TV series, like so many projects, currently has a working title: Cut Off.

Brielle and Ariana’s potential series would follow the two of them as they leave their parents’ home in Atlanta to move to Los Angeles.

They want to launch their own hair care line. Viewers would also watch them figure out how to live on their own.

The twist, the one giving the project its working title, is that Brielle and Ariana would be going without parental support.

Not a lack of love. This isn’t a no-contact breakaway situation.

But no financial support from their reality star mom or their professional athlete dad.

“Skeptical of their ability to fend for themselves and take their new venture seriously,” the proposed series pitch begins.

It continues: “Kim plans to put her girls to the test by completely cutting them off.”

So, what exactly does that mean?

“For the first time in their lives, the sisters will have to pay their own bills,” the pitch suggests.

Brielle and Ariana will have to “live on a budget, do their own laundry, and cook and clean.”

The synopsis adds that the sisters will need to do this “all while staying out of trouble.”

Given Ariana’s DUI arrest earlier this year, staying out of trouble is a not-insignificant portion of the challenge.

“With the help of their friends, the Biermann duo will have to rely on each other,” the pitch reads.

The sisters will have to work together “to see if they have what it takes to make it on their own.”

Now, several years ago, Brielle noted that she did not rely upon her parents for all of her finances.

We certainly believe that. When it came to paying for her things, Brielle had her own money to spend.

But we all know that spending your own money on luxuries and a few needs while living at your family’s mansion has to be different from paying all of your own bills, right?

Los Angeles is also a very expensive place to live.

On the one hand, Brielle and Ariana aren’t moving there to live with two roommates in a one-bedroom apartment while waitressing.

But they’re not exactly tackling the easy version of moving out. They’re not staying in town with their parents. And there are cheaper places to live.

Even if Cut Off happens, it could end up on various networks or streaming platforms. Peacock would make the most sense, but will Peacock see it that way?

Whatever the title, we have one suggestion: make sure that one of the friends who shows up on the show is Ty French.

He’s a longtime bestie of Brielle’s. And given the number of people thirsting after the model, it could draw extra eyes to the series. It can’t hurt, right?