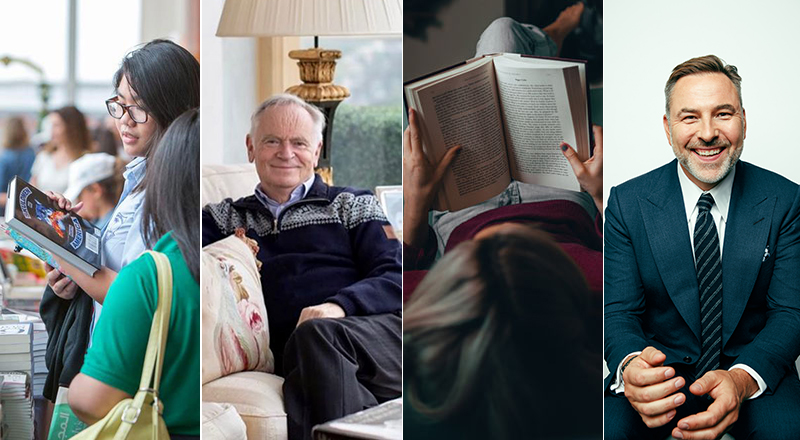 We are going big this year – Festival Director, Ahlam Booloki…

Bibliophiles, we have some great news to start off your work week. The Emirates Airline Festival of Literature is back next year taking place from Wednesday, February 1 to 6, 2023.

The literature festival will be celebrating its 15th anniversary which means you can expect a spectacular line-up of authors. When What’s On spoke to Festival Director, Ahlam Booloki, she stated that the festival will feature 250 authors and almost 300 sessions.

The festival’s theme for the crystal anniversary will be Old Friends which, Booloki says ‘is a tribute to our old friends, our loyal friends and the books that have kept us company in good times and bad times.’

Speaking of old friends, the festival returns to its neighbourhood near Dubai Creek in 2023. Sessions will occur at its original home – Intercontinental Hotel, Dubai Festival City with some sessions held at the architectural wonder – Mohammed Bin Rashid Library.

Alexander McCall Smith: A master storyteller and one of the world’s most prolific authors, his number 1 Ladies’ Detective Agency series has sold over twenty-five million copies.

Barkha Dutt: Dutt is of India’s well-known broadcast journalists and anchors with more than two decades of reporting experience. She is the founder-editor of Mojo Story, a digital news channel.

Cecelia Ahern: Multi-best-selling Irish novelist of PS, I Love You; Where Rainbows End; and If You Could See Me Now.

James Fox: BAFTA-nominated broadcaster and art historian most notable for presenting documentaries on the history of art for BBC Four.

Jeffery Archer: Returning to the festival is one of the world’s bestselling authors. Archer’s international sales surpass 275 million copies and the author is guaranteed to be a hit at the festival.

Nathan Pyle: An American cartoonist and New York Times best-selling writer living in New York City. He is the creator of the popular webcomic Strange Planet.

Piyush Pandey: The Chairman of Global Creative and Executive Chairman of Ogilvy India will speak on his book Open House and will share his experiences in the advertising industry.

For little ones, David Walliams (Britain’s Got Talent judge, pictured top left) and Ben Miller (pictured top right) return to the festival and will be doing a session together for the first time with fun-filled stories. Lemn Sissay – a celebrated poet, playwright, memoirist, performer and broadcaster also returns with Greg Stobb – the illustrator of Sissay’s books.

Ali Al Saloom: The Emirati cultural tourism program presenter will be regaling audiences with tales of his travels across 100 countries.

Noura Masri: Masri is a self-taught Jordanian artist dubbed the female Picasso will be at the festival for art fans.

Julia Johnson: Everyone’s favourite Dubai-based author who has written a number of stories for children will also return to the festival.

The whole list of authors can be found here.

What else can you expect at Emirates Literature Festival?

The literary event opens with the signature (and very popular) Desert Stanzas event where you can enjoy poetry with your feet in the sand as you sit under a canopy of stars.

Booloki stated that the milestone year will have a number of special events planned. She added there is a magical evening of music, a performance with Kahlil Gibran; a Big Fat LitFest Quiz; a one-of-a-kind Writer’s Feud for Arab audiences, and ‘Around the World’ with sessions in Hindi, Filipino, Malayalam and Urdu.

Also returning is the Festival Fringe, with a host of fun free events and performances for all the family.

Ticket prices start at Dhs25 and there will be 15 per cent off general session tickets in a special early bird anniversary offer running from November 15 to December 15. There will also be a Dhs199 Crystal pass which will give you access to the Green Room.

Tickets can be booked here.