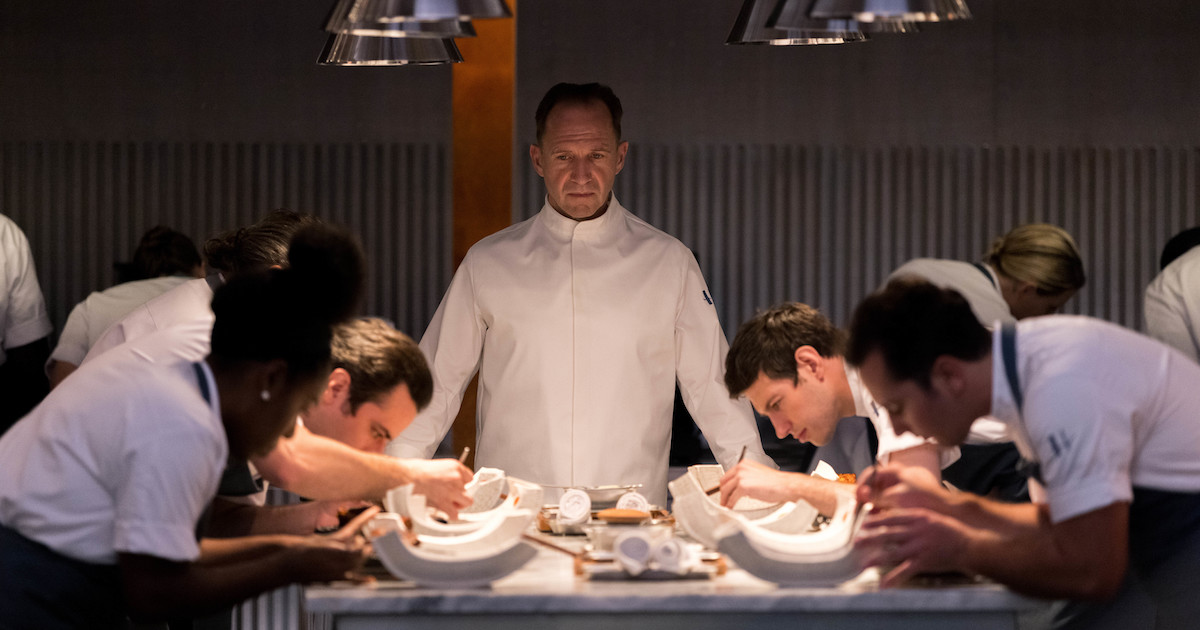 It’s an odd thing, writing a review for a piece of art that is itself deliberately and very transparently sneering at another form of art, and that ruefully satirises the people that deem themselves worthy of critiquing it. It’s just all very meta, in a way that would make it a perfect serving ritual in the sort of restaurant The Menu is biting thumbs at.

The movie is directed by Mark Mylod, who’s probably best known for his craft on TV – occupying the ‘head chef’ role on episodes of Game of Thrones, Succession and Shameless. It’s pitched as a black comedy-thriller, with a cast that includes Ralph Fiennes as Julian Slowik, the mercurial celebrity chef that runs the hyper-exclusive remote island restaurant of Hawthorne. There’s no ‘peasants not welcome’ sign, but you know…

As a parody it deals with, often in well executed humour, some pretty risible themes in modern molecular gastronomy (and art in general). Most of us can relate. Even if we’ve had limited exposure to the sort of pretentious kitchen that serves soup in a shoe, or salmon gravlax in a fax machine – we’ve all heard the stories, felt the instinctive urge to flip tables and then successfully subdued it to an exaggerated eye roll. Or the persistent obsession with foam, the idea that somehow the public just can’t get enough of the vaguely salty, bottom-of-the-washing-up-bowl aesthetic.

Doing it for the ‘gram

Another trend that The Menu takes aim at, one that began in the food-blogosphere but has now proliferated so far as to even blight the average Tuesday trip to Nando’s, is that of the obsessive need to photograph (and latergram) every item of food that’s presented to you. Just like the real life group of French chefs that have banned the activity in their respective restaurants, chef Slowik (Feinnes) has a strict no TikTok policy for his own evening of culinary pomposity. It’s a rule that the former half of bickering guest couple, Tyler (Nicholas Hoult) and Margot (Anya Taylor-Joy) ignobly ignores.

But beyond the satire, how well prepared is the meat in this cinematic dish?

The film is paced with close enough synchronicity fir us to say it’s ostensibly delivered in real-time, divided into episodes that are concurrent with each course of the evening’s meal. A vague vignette (let’s go with vinaigrette) format, that progresses with exponential upscaling of sinister realisations. It’s gripping, at times thrilling, Feinnes and Joy are Michelin calibre ingredients, but with so much screen time devoted to throwing well-seasoned shade at the farcical fashions of food, it feels like there’s been a compromise to other aspects of the tableside theatre.

The characters are developed well, the other guests for example — the table of bankers; the wealthy (potentially a politician?) Richard Liebbrandt (Reed Birney) who it’s made clear from the opening scene, has history with Margot (Joy); the food critic Lillian Bloom (Janet McTee); the washed-up movie star (John Leguizamo); and maître d’ (Hong Chau) are all served up in a deliciously despicable consommé.

But what was noticeably absent on the palate, was sustained (or at least built) suspense. The intent is there, we just didn’t get the full flavour of it. Or maybe we’re just not sophisticated enough to appreciate it.

Verdict: The Menu, isn’t just an acquired taste, it’s a well-executed black comedy that hits the spot that cinema should. And yeah, if you’re asking, we would go back for seconds.

Bonus content: We watched the movie at the new Cinemacity Fountain Views in Downtown Dubai — it was an outstanding cinema experience. Rather appropriately great food, lush leather chairs, it’s fully licensed and has its own cocktail lounge.