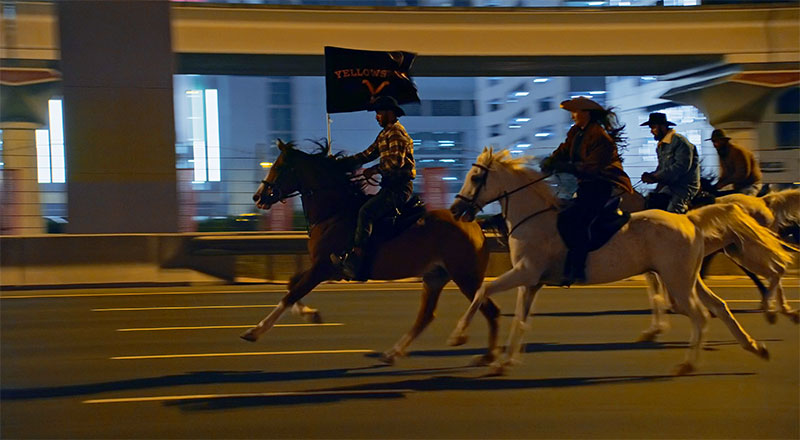 No, we’re not kidding…

Sheikh Zayed Road in Dubai has been shut down for a number of reasons in the past few months, but this time, it was because cowboys and horses took over.

No, it’s not a super-early April fool’s prank. We have proof so check out the images in the gallery below shared exclusively with What’s On.

And yes, it is definitely Dubai as you can see the Dubai Metro tracks in the background. If you need more proof, read on and watch the video shared by OSN.

So, why exactly did a group of five cowboys on horses gallop on one of Dubai’s busiest streets? Well, it’s to celebrate the new season of the Paramount Network’s hit series, Yellowstone. Season 5 is now being streamed exclusively on the multinational premium entertainment platform.

When did this all happen? Well, the dramatic showcase took place Sunday, November 13.  The pursuit is set against Dubai’s panoramic skyscrapers bringing together the classic with the future – reminiscent of the show and bringing together city and country in one place.

According to Ashley Rite, VP of Marketing and Growth at OSN+, ‘OSN+ is constantly striving to drive awareness for its key content, bringing it to life in the most creative ways. More than just your average western, Yellowstone is a thrilling drama that brings together family, rivalry, and conflict all within one exciting and eclectic series.’

Yellowstone follows the Dutton family, led by John Dutton (Kevin Costner), who controls the largest contiguous cattle ranch in the United States. As the series progresses, he is continually challenged by those seeking to take control of the ranch’s land.

New episodes drop weekly, and if you haven’t seen the show before, don’t worry, Season 1 to 4 is also on the platform so you can be all caught up. You can watch the season 5 trailer below:

The series is a popular one with 11 million average total viewers. According to OSN, the season 5 premiere has become the most-watched show across all of TV in 2022 and the most-watched cable premiere since 2017’s The Walking Dead.

Previous articleThese Dubai ladies’ nights have deals for the guys too
Next articleEtihad launches massive White Friday sale to UK, India, US and more