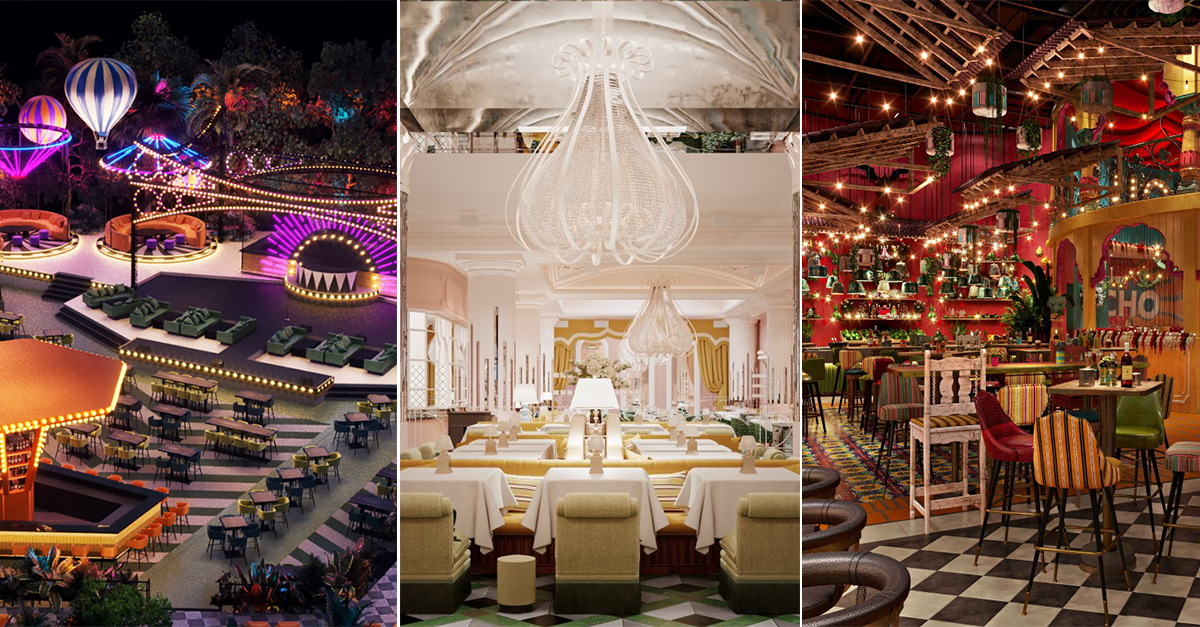 It might be the end of the year, but Dubai’s culinary scene shows no signs of slowing down. Here’s 10 new restaurants opening in Dubai this December.

Popular American crab shack Aprons & Hammers will open its latest branch in the first week of December, bringing its American barbecue bites to a laidback, licensed spot at Studio City. Housed within Studio One Hotel, the venue boasts signature dishes featuring crabs, mussels, and prawns doused in the zingy all-original sauce, freshly shucked oysters, and an array of refreshing beverages to match. The renewed concept still has the classic Aprons & Hammers look and feel, with bold pops of blue and orange, giving a cool, coastal aesthetic to this neighbourhood hotel.

New restaurant Babylon promises to bring something new to the haute dining scene in DIFC when it opens next month. Located in Gate Village 5 and taking the place of Gaucho, Babylon’s sophisticated interiors and sultry decor set the stage for an evening of fun fine dining and extraordinary entertainment. Influenced, somewhat tellingly, by the bygone city of Babylon, this new DIFC restaurant promises to embody this former wonder of the ancient world. Known as a place of maximalism and opulence, this splendour will be showcased throughout rich interiors, a menu of gourmet delights and vibrant entertainment set to dazzle guests.

Joining the likes of Gordon Ramsay’s Bread Street Kitchen, Seafire Steakhouse, Nobu and Wavehouse in Atlantis, The Palm is En Fuego, which will add South American cuisine to the mix. And this new restaurant, opening next month, is a treat for the eyes and taste buds, with En Fuego set to be a high-octane, social dining concept with a big focus on entertainment. The menu is set to be just as colourful, with Le Cordon Bleu-trained chef Daniel García at the helm of the kitchen. Showcasing a collection of Latin America’s finest dishes and flavours, on the En Fuego menu diners can expect to be taken on a culinary flight from the streets of Rio De Janeiro to the mountains of Peru.

Promising a glamorous Parisian experience, new restaurant Josette will open its doors in DIFC’s ICD Brookfield Place. At Josette, you’ll find more than just fancy food, as the concept is the brainchild of London-based artist and interior designer, Luke Edward Hall. The talented creator conceived his idea around an imaginary character, Josette, inspired by the beautiful French actress Josette Day. As such its interiors are elegant and eccentric, with fictional character Josette’s mischievous, chic, well-travelled personality laced into intricate design details. On the menu, expect reimagined classics such as ratatouille, escargot, moules marinieres, foie gras and seafood platters. You won’t want to miss the signature Crêpe Josette, served in a special crêpe trolley with some wow-worthy table theatrics. Alongside the main restaurant, Josette will also house Petit Josette, which is set to serve as an inviting neighbourhood hub, fusing the charm of a Parisian street café with the hustle and bustle of DIFC.

Sister restaurant to vibrant Amalfi-inspired Italian Lucia’s in Downtown, Limonata promises the same interiors that demand to be Instagrammed and the kind of ambience that keeps you partying into the night. You’ll find it at Club Vista Mare.

If you love lofty rooftop dining in Dubai, there’s a new restaurant you need to know about. On the 73rd floor of Address Beach Resort, the stunning Mott 32 – an upscale Chinese restaurant that hails from Hong Kong – is slated to open before the end of the year. As well as seating in the indoor restaurant, Mott 32 will feature an outdoor terrace where diners will be able to soak up the stunning views of JBR, Palm Jumeirah and Bluewaters. First renders of the venue show plenty of brass and metal elements, with hues of emerald green, leafy botanicals and pops of peach breaking up an otherwise mechanical-looking space.

Formerly found in Grosvenor House, Rüya is making a welcome return to Dubai when it opens in a brand new location on The Palm this December. Lacing traditional Anatolian cuisine with modern nuances, guests can expect to embark on a flavourful expedition through the bountiful terrains of Western Asia’s Anatolian region, from the shores of the Mediterranean to the banks of the Black Sea. The space, which adds to the culinary array at The St Regis Dubai, promises to be bold and bright, with an open kitchen the star of the show. Patterned tiles are an ode to the rich history of the Anatolian region, elegant chandeliers elevate every occasion, and the juxtaposition of marble and metal creates a modern bar setting, making Rüya an interesting amalgamation of rustic and regal.

A spectacular new social venue called Sayf is set to turn up the heat this winter season. The venue will officially open its doors on Tuesday December 20 at Festival Bay, and promises a vibrant atmosphere, inventive gastronomy and some seriously wow-worthy entertainment. Guests can expect an electric menu of international cuisine that will be paired with a tantalising variety of cocktails. The aesthetic promises to be just as jaw-dropping, with modern neon decor, playful installations, and Insta-worthy elements at every turn. A roster of talents gracing the stage are set to add the much lauded entertainment element, including dancers, singers and circus acts.

It’s an award-winning, contemporary Japanese restaurant that’s consistently recognised among the best in London, and soon, you’ll be able to dine at Sumosan in Dubai. The upscale Japanese restaurant is set to open in The Dubai EDITION in Downtown in the coming months, and we’re already drooling. The brand is celebrated for high-quality sushi, sashimi, and an innovative Japanese cuisine menu created by Executive chef Bubker Belkhit. While we’re not yet sure what the Dubai menu will look like, we’re hoping to see beloved classics such as lobster salad, tuna and truffle rolls, and salmon rice pizza all feature as part of the Dubai offering.

There’s a brand new beach club washing up on Dubai’s sandy shores – and this one comes with a side of fashionable French flair. Verde Beach, already established in stylish St Tropez, is set to open this December Jumeirah Beach Hotel. If the name sounds familiar, Verde Beach is the beachy sister brand to trendy French restaurant Verde, which opened in Four Seasons Restaurant Village in December 2019. Part beach club, part restaurant, the menu will be overseen by executive chef Julien Lee Thibault. We can expect an array of crowd-pleasing Mediterranean hits, from light tartare’s to sharing plates. It’s designed as the perfect pairing for a day by the beach.