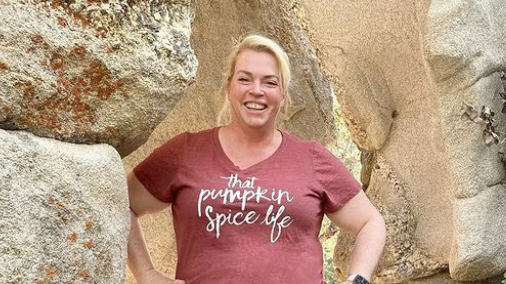 It doesn’t really take an astute observer to realize that Janelle Brown hasn’t been happy in her marriage for a while now.

If you’ve kept an eye and/or an ear on Sister Wives for the past couple of seasons, you’d know that she’s pretty fed up with Kody.

Which is totally fair — thousands of viewers feel the same way, and we don’t even have to interact with him.

Last season, we saw the two of them arguing back and forth over her decision to let her adult sons live with her while they set themselves up for success in life, which is something totally normal and not even a little strange.

During one of those arguments, Janelle even told Kody to “f-ck off,” which was definitely surprising.

She’s kept up that attitude this season, too — she’s even amped it up a few notches.

We’ve seen her be a best friend to Christine as she navigated her divorce from Kody, something which Kody said felt like a betrayal.

We’ve seen her actually tell Kody that she was questioning their relationship and whether or not it was working anymore.

In a confessional, she said “I never thought I’d be in a place where I would be questioning my relationship, but the last few years, I’ve began to wonder if we’re compatible anymore.”

In the newest episode, we see Kody berate her for not respecting him and his wishes on how the family should have reacted in the early days of the pandemic.

Later, she told the camera, and this is super interesting, that “I don’t need to be beaten into submission, made to kowtow. I’m just not. I just don’t need this.”

“In the last 18 months, I’ve realized that I’m pretty good. I’m independent, and I’m not going to stand here and be yelled at. I just don’t need it. I don’t deserve it and I don’t need it.”

Rumors have been running rampant for months that she’s left him.

Just a couple of days ago, an anonymous source told In Touch “Janelle is a strong independent woman and realized she can do it on her own,” and that she “outgrew” Kody.

And of course we can’t forget that memorable moment where Gwen, Christine’s daughter, stated on social media that Kody was only with Meri and Robyn these days.

At this point, it feels like we’re really just waiting on an official statement, either on the show or on social media.

But it turns out that Janelle has made a little statement over on Instagram … and it’s pretty darn interesting.

In the past, Janelle’s Instagram bio mentioned being a wife and a mother, so pretty standard stuff, right?

Earlier this year, she changed it to read “I’m just over here living my best life. I ❤️ shoes but can’t figure out how to wear them fashionably (Ask my kids).”

Fans noticed it, and of course it was interesting — at that point, the rumors had definitely already started, and this would have been shortly after the footage we’re seeing now was filmed.

But fans also noticed that recently, she changed her bio up again, this time to read “Just me” along with a big smiley face.

Some Sister Wives sleuths have pointed out that just before Christine announced her split from Kody, she made a similar change to her Instagram bio.

Others think that she’s referring to the fact that her youngest child, Savannah, just turned 18, so perhaps she’s moved out and she’s just telling us that she’s living completely by herself now.

Another popular theory is that this change is sort of a combination of these two things, that maybe she has left him, but wanted to wait until all her children were grown before making it official.

Either way, Janelle has to be aware of the rumors and of how bad her relationship with Kody looks on the show, so changing her bio like this seems pretty pointed.

Could this finally be the end for Kody and his second wife?