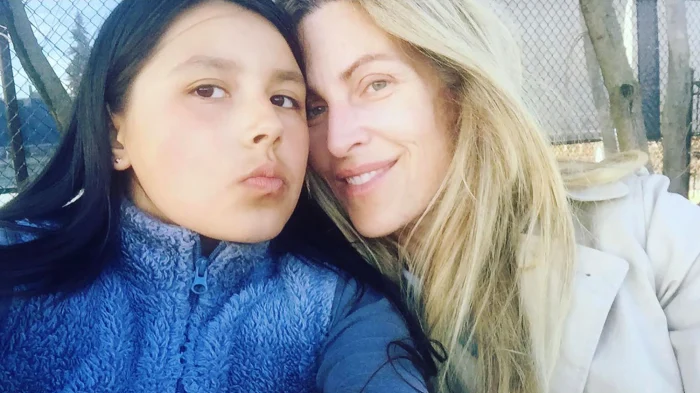 Earlier this month, Jack McDermott called out his mom for spreading lies and disrupting his blended family.

He spoke in defense of Dean McDermott and of Tori Spelling, but also of his siblings. Apparently, Mary Jo Eustace was impacting them, too.

Now, Tori has revealed that Jack is not the only “bonus” child staying at their home for the holiday season.

Mary Jo’s teenage daughter, Lola, is currently “living” with them.

This week, Tori Spelling spoke to Bethenny Frankel on the ReWives podcast about where things stand.

“It’s currently the Christmas season and I have seven kids right now,” she shared.

Tori detailed that this is “Because we have his ex’s two kids [with us].”

“So one from his [past] marriage, my stepson,” Tori noted, referring to 24-year-old Jack McDermott.

“And then,” she continued, they have “her daughter living with us.” That would be Lola, who is 17.

“We have a big blended family right now,” Tori celebrated. “The more, the merrier!”

Tori did not choose to explain why Lola is “living” with them — but it didn’t sound like it’s a super short-term deal, given her phrasing.

Interestingly, Dean was going to cooperate with his ex, Mary Jo Eustace (who is, again, Lola’s mom) on a podcast. That collaboration became short-lived after Mary Jo leaked negative things about Dean and Tori.

And it was 24-year-old Jack, Dean and Mary Jo’s son, who called out exactly what happened.

A couple of weeks ago, Jack posted to Instagram, then deleted, a callout post aimed at his mother.

Jack wrote that “I have rarely spoken out as I preferred to stay out of it.”

“Unfortunately, due to my mothers recent decision,” Jack went on.

He acknowledged that apparently she decided “to spread information about my Dad, Step mom, and my siblings.”

Jack then expressed that “I am no longer able to stay silent” in light of that betrayal.

“About a week ago,” Jack recalled, “my Dad made the decision to step away from his podcast with my mother.”

He then explained his father’s decision: “He chose to leave due to negative comments about our family.”

“And,” Jack added, “consistent attempts to malign his character.”

“He also chose to leave due to the producer of the show betraying his trust,” Jack’s explanation continued.

“And,” he went on to accuse, “divulging private information.”

“For 17 years,” Jack pointed out, “my father has atoned for mistakes he’s made in the past.”

“He has grown so much as a person,” Jack then praised.

“Up until a week ago, our two families were living in harmony,” he characterized the erstwhile dynamic.

“With this podcast, it has driven a wedge between our two families,” Jack openly lamented.

“And,” Jack went on to detail, this has all “created a divide I am not capable of mending.”

As for fixing things, he confessed that “Sadly, I’m not sure it can be.”

Mary Jo has since taken the podcast on as a solo project. Jack encouraged people to take his mother’s claims with a “grain of salt.” He plead for his mother to “respect my blended family.” That is not unreasonable.

Previous article7 of the best Dubai cafés for a matcha-needed break – Emirates Woman
Next articleWant to plan for NYE? Here’s 20 spectacular places to book in Dubai – Emirates Woman